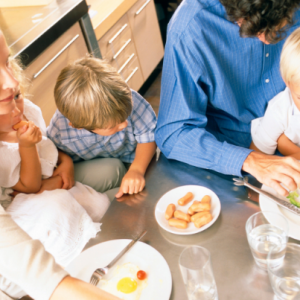 All ten of us were around the dinner table and the conversation slouched in a bad direction—fast. The kids were discussing some choices that a friend had made. These were not necessarily sinful choices but could reasonably be categorized as lacking wisdom. I tried to arrest the free-fall by looking over at my youngest son, Hunter, asking him, “Hunter: What is something you are thankful for today?” I don’t even remember what he said. I then headed around the table asking his siblings the same question.

I could not believe it. Like a school of piranha fish my children began attacking one of their siblings for what they said they were thankful for. Distraught, Leslee left the table and quietly went upstairs. I stayed for about 3 more minutes and went upstairs to find her.

Is this a familiar scene in your home?

Leslee and I were both angry about what we saw. It was a struggle. The situation needed to be addressed. But how? We knew we needed to pray and get our own hearts right so we could then discuss what had happened. We discussed what we should do in order to address what happened. Then, we went downstairs and called a family meeting. After everyone gathered in the living room, we prayed with the children and then calmly asked some questions. We had about 45 minutes of good discussion which led to some confession and restoration between siblings. Leslee and I even gained some insights we hadn’t had before. It wasn’t quite a scene from the Sound of Music but it was effective.

I wish that I could say that events like this were rare. And I wish I could say that they all cleaned up as relatively easily as this one apparently did. My point in sharing this is to encourage mothers and fathers with two reminders:

First, God works through the messes. The messes are real life. I think we all (parents and children) learn more from messes than from perfection. We all want life to be less confrontational and more peaceful. We wrongly conclude that because there is conflict that there is something inordinately wrong. But that doesn’t have to be, nor is it usually the case. While we seek peace it doesn’t just happen because we wish it but because we work through the inevitable challenges presented by our sin.

Second, Prayer is powerful.Prayer demonstrates a simple dependence upon him. He must act because he is the only one who can change our hearts. Sometimes—especially in the midst of conflicts—we don’t want to pray. Prayer sometimes feels hollow. But God sees in our hearts the desire to honor him. He is glorified in this. And we are helped.

It is easy to become discouraged when we see the same song, 99thverse in our homes. We can easily lose hope because we wrongly conclude that God is not at work. But don’t give in to the hopelessness that is so easy to give in to in the home. Stand firm in the fight for our families. Use the powerful means of prayer. Never doubting that God is at work through it all to accomplish his glory and our ultimate joy.