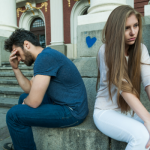 It was one of those conversations where Leslee and I could not seem to understand each other. Though calm, things were not going swimmingly. When she said the sky was purple, I responded that the moon was made of cheese. (At least it seemed that way).

We were trying to dig our way out of a quarry of boulders including why Leslee can’t sleep between 1 am and 3 am, what to do next about two children’s health struggles, menu planning, time to shop for groceries, whether or not one of our boys should play flag football in the spring or play soccer with his older brother in the fall, and why I am too distracted with the meteorites in my own solar system to have time to talk. Yes! We were trying to deal with all of these in—one—conversation.

These are conversations of some alien kind that seem to resemble a scene from Star Wars more than the preferred Norman Rockwell painting. Yes, it seems a lot like a war—and it is—even if there are not raised voices and red faces.

What can be done to help us in these galactic conversations? May I suggest three simple things?

Realize That We Are in a War

Our relationships are usually the battle fields on which this clandestine war plays out. While we are players, the war is ultimately between two kingdoms: a kingdom of light ruled by Almighty God and a kingdom of darkness ruled by Satan (Col. 1:13). Praise the Lord that we can rest knowing that for those who are united by faith in Christ, the war is already won in Christ (John 16:33, Rom. 8:37, Eph. 2:6). In fact, God takes the evil thoughts, words and deeds and is able to use them to do good in our lives (Gen. 45:4-9, 50:20; Rom. 8:28-30). This is as miraculous as it is hope-inducing.

Remembering that we are in a war provides perspective in the moment—and relief through the divinely powerful weapons God has provided, two of which I am now going to mention.

(our monthly newsletter)
And receive a FREE excerpt from:
Who Are You? A Simple Rediscovery of Our Identity in Christ

Speak The Powerful Word of God

Quote the word of God to each other. The word of God is one of our weapons (Eph. 6:17). Jesus used this weapon in fighting Satan’s temptations in Matthew 4. The promises in God’s word are divinely powerful and we do well to remember to speak them to each other. This is not what one feels like doing in that moment. But faithfully speaking God’s promises in distressing situations brings peace because God’s word is powerful and it is infallible: it never fails.

While this does not usually fix the specific issues, it does bring peace and the ability to work together—even if it means peacefully ending the conversation and coming back to it at another time. There has never been a moment when I’ve used the word in one of these conversations where it did not bring peace.

One helpful promise is Habbakuk 3:17, “Though the fig tree should not blossom, nor fruit be on the vines, the produce of the olive fail and the fields yield no food, the flock be cut off from the fold and here be no herd in the stalls, yet I will rejoice in the Lord; I will take joy in the God of my salvation.”

When everything seems like its collapsing around us, we can look up in victory because God IS. God will see us through the battles.

Pray Out Loud, Each of You

Finally, pray together. Prayer, even weak prayer, is still a vital weapon. Paul says to pray at all times in the Spirit (Eph. 6:18). When in one of these difficult conversations just stop and pray together. Not one of you, but both, and out loud. Again, it is probably not what you feel like doing. Just be honest! God knows your heart anyway. Doing this is a clear exercise of faith and dependence upon God that glorifies him.

Confess your sin to God. Maybe its a desire to rely on yourself rather than to rely on him in that moment. Remind God of his promises. Beseech Him to act by bringing understanding and peace. This is also a good time to pray in thanksgiving to God (Phil. 4:6). We can be thankful the issues we’re dealing with are not worse. We can be thankful that God has promised to be the third strand in our marriages (Eccl. 4:12).

These are three simple suggestions that will have a powerful impact in the war that we all find ourselves every day. I encourage you to use them with the expectation that God keeps his promises and works all things out for his glory which is also our joy. Fight using the tools he has given. See the victory he can provide. You can win the battle because Christ Jesus has won the war. We stand in his victory.

How to Gain Confidence to Shepherd

Is Your Cellphone Killing Your Relationships?