A Simple Way to Present the Gospel to Young Children 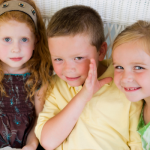 It was very late one night. I was working in my office when one of the “sibling informers” stormed into my office with tidings of great destruction that one of my young sons had foisted on his older brother’s fish tank. Apparently, this young child had gone into the room and dumped a whole can of fish food and a whole bottle of chemicals into this delicately balanced salt water tank. Nemo and the corals were dying fast. Dropping things into the water had been a problem in the past. So, my young son knew what he was doing was wrong. But this incident was far worse.

Jesus Had to Die For That

I took the young offender aside and had a little conversation about the matter. He came around to admitting that what he had done was wrong and asked forgiveness of his older brother. A turning point in our conversation was when I told him, “Do you realize that Jesus had to die for you to be forgiven for what you just did?”

Lord willing, it also helped him see the greatness of his forgiveness in Christ a little more clearly. Maybe that was a poignant moment that he will remember for a long time to come. No doubt, there will be many, many more conversations where that truth will need to be repeated. But that is the point. Discipline is a regular occurrence where the reality of Christ’s work can be more clearly understood and embraced when we explain that work in those moments.

Moments of Discipline Are Opportunities Not Just For Law, But For Grace, Too

Because we are in a rush, it is easy to simply drive things toward a confession of the wrong done, ask forgiveness and get back to our game of candy crush. But it is a great opportunity to say, “Jesus had to die to forgive you for what you just did.” It makes Jesus’ work more personal. It helps one see how bad ALL sin is no matter how insignificant we might think it is. It also helps us begin to understand the grace that is ours because of the cross! This produces repentance resulting in greater Christ-likeness in our children. As parents, we need to confront ourselves similarly. As we practice it ourselves, we will be better prepared to minister this same grace to our children.

Was this encouraging to you? Please forward it to a friend!